Bruno Emanuel Quaet-Faslem, born in Dendermonde, Flanders (now Belgium) in 1785, minister of architecture at the Royal Court of Hannover, lived and worked in Nienburg, built this home for himself and his family in Classical style in 1821 and died here in 1851. The house is situated directly adjacent to the former „Leintor" (The „Flax" Gate) guardhouse, part of the city walls demolished by Napoleon's army in 1808. Facing South, the house is but a stone's throw from the „Steinhuder Meerbach", one of Nienburg's waterways, and the „Europawiese". This spacious park area is dedicated to the Spirit of European Unity considered by many to be a recent development, but which was actually already propagated by Quaet-Faslem in the early 1800's! 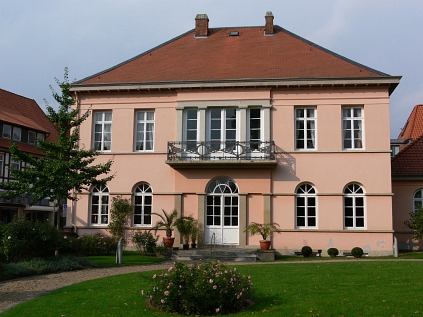 The Quaet-Faslem House is the home of a number of the collections of the Nienburg Museum and was newly opened in 1995 following a very thorough renovation. The house consists of four parts; behind the main house is the so-called „Zeichensaal", the art or drawing hall, in which Quaet-Faslem instructed budding craftsmen, while a foyer and utilitarian rooms are found in the section beyond. Frequent special events take place in the spacious drawing hall, while the remainder of the rooms provide the setting for many of the museum's permanent exhibits.

Biedermeier
The period of art prevailing during Quaet-Faslem's lifetime is called „Biedermeier". Numerous pieces of furniture and other Utensils and devices found here in this house are reminders of that age. Biedermeier is often synonymous with coziness, although those times were certainly not always pleasurable. It was popular to issue medals to commemorate all manner of events and celebrations. Our exhibit is enhanced by depictions of Nienburg and portraits from the 19th Century.

Rococo Wallpaper from Diepenau/County of Nienburg
A culturally historical highlight of this house is the completely preserved wallpapered room from the Rococo Period (1760/1770). As was common in those days, it was presumably a wandering artist who executed the oil painting on linen, probably at the request of a yet unknown, but obviously influential personage of the time. During the personal union, when Kings of Hanover and Great Britain were one and the same, Diepenau was one of the rest stops for the King on the way from Hanover to London. Amongst the Biblical scenes depicted here are the Exodus from Egypt and Jacob's Dream (Jacob's ladder).

Cast Iron Stove Plates
Throughout the house cast iron stove plates are on display. These were once integral parts of rectangular wood-burning stoves which were decorated with special motifs, usually Biblical scenes from the Old and New Testaments, worldly virtues, coats of arms or simply scenes in the Biedermeier style (i. e. classical depictions of grace, virtue and harmony).

„Virtual Biedermeier": Like Living in the Biedermeier Period
In the upper story of the Quaet-Faslem House all the rooms reflect the Biedermeier style and spirit. On the south side we find a cozy living room furnished with pieces from about 1820 to 1850. Among these are a lady's writing desk, table and chairs and a round cast iron stove displaying classical motifs.

The center room, called the Mirror Room, like the other two, is graced by distinctive French paper ceiling decor specially ordered by Quaet-Faslem himself from Paris.

Immediately adjoining to the west is the Music Room.

Across the hall we find a bedroom with typical furnishings from the early 19th Century; among these is a very rare baby's cradle.

The adjoining room is the council chamber of the „Hoya-Diepholz'schen Landschaft", owners of the Quaet-Faslem House. The Coats of Arms of families from the region around Hoya and Diepholz as well as photographs of the presidents of this historical organization over the years can be seen on the walls.

To the east lies so-called „Temple Room" with its distinctive wall fresco depicting Solomon's Temple. Here graphic art is on display which was, in part, brought back from Italy by Quaet-Faslem as demonstration patterns/models for architectural studies. Also called the „Lodge Room", this is purported to be the place where Nienburg's Masonic Lodge, „George of the Silver Unicorn", held its meetings. Quaet-Faslem numbered the founding fathers of the lodge, was High Master from 1823-1834 and made this room available to the Masonic order for many years.