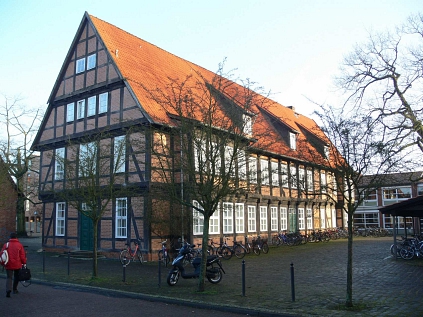 The Fresenhof, a stately 2-story, half-timbered building, which today houses the Nienburg Museum, is one of Nienburg's oldest and handsomest edifices. Its history reaches back to the early Middle Ages and it may be safely assumed that the fief (Feudal landed estate or manor) whose proprietor resided here existed long before Count Heinrich I. of Hoya assumed possession of the province of Nienburg in 1215.

The name Nienburg originated from the Low German meaning "new castle/fortress" and indicates that an even older fortress once stood at this strategic location on the Weser River. Although protected by the Weser, as well as by earthen defense works and a moat, this new fortress was useless without trained fighting men to man it and to defend it and its inhabitants in times of war. These functions were performed by the so-called "Burgmannen" or vassals in exchange for the right to live on and farm the landed estates (fiefs) outside the fortified walls. The majority of the landed estates mentioned in documents from the 11th and 12th centuries were fiefs of this kind.

Upon assuming ownership of the province of Nienburg in 1215, Count Heinrich I. of Hoya found that "Burgmannen" (vassals) were indispensable for the protection of the fortress and the defense of the surrounding territory. Thus, he and his successors continued to bestow large fiefs on freemen and noblemen in exchange for military service and the provision of men, weapons and horses in times of emergency. In that age of barter economy, the feudal fief System presented the only possibility for the ruling lord (in this case the Count) to acquire and hold the allegiance of influential men and to draft them into his service.

Noblemen were eager to be given such fiefs, as this afforded them an opportunity to secure a livelihood for themselves and their families and to increase their personal wealth. The chivalric Status achieved by the vassals ("Burgmannen") through their service and allegiance to the ruler raised them high above the rest of the population. Residences of such knightly vassals were once situated in all the major settlements of the Nienburg area: Hoya, Nienburg, Stolzenau, Uchte, Steyerberg and Drakenburg. The proprietors of these extensive fiefs owed allegiance to the Counts of Hoya. 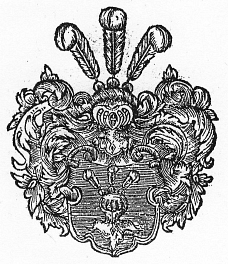 The Freses' Coat-of-Arms© Museum Nienburg/Weser"The coat-of-arms of this aristocratic old family displays an open knight's helmet of silver and gold, above which are seen three red spheres, from which rise 3 white ostrich plumes on a blue field. The large open helmet atop the shield has the same Ornaments. The colors used are blue, silvery-white and red."

The earliest mention of a Burgmannssitz (Vassal's residence) in the City of Nienburg dates from 1263, when Hermann de Buren was proprietor of the fief in the northeastern section of town. As his name indicates, he was originally from the village of Bühren. His family has long resided there, but died out in the 14th century when the last survivor, a priest, had no descendents. With Heinrich von Bühren, the last owner of the Burgmannssitz from that family, the Nienburg line also ceased to exist.

On June 6, 1485, Count Jobst of Hoya bestowed the extensive fief previously belonging to Heinrich von Bühren of Nienburg upon Arnold Frese. This change of ownership meant a transition to an aspiring family which was to become one of the wealthiest within the territory ruled by the Counts of Hoya.

An inventory of the Freses' property reads as follows: "The Freses are endowed with these estates: the fief belonging to the Nienburg fortress with fields, garden plots and diverse privileges, as was the von Bühren family before them, with 27 pieces of property for which the von Bührens held mortgage deeds." - Further, the Freses were endowed with the fief of Stolzenau, the farming estates in Roden, Holzhausen, Wellie, Bühren, Lemke and Holtorf; they owned 7 farms in Tysenhusen, 2 dairy farms in Holtorf and various widely scattered pieces of land.

As vassals of the Counts of Hoya, this extremely well-to-do family had close connections to the rulers. The Freses' wealth is underlined in a document from the year 1430, when Ortgis Frese lent Count Johann of Hoya 350 gold ducats: a tremendous sum of money for those times.

With the demise of feudalism, the bonds between the Freses and the Counts of Hoya were dissolved, but the land belonging to the former vassals continued to be farmed and the Burgmannssitz became a manor house, the center of an agricultural estate. The successive owners of this estate were voting members on the administration board of the Hoya-Diepholz District until 1913, when the voting privilege was transferred from the Fresenhof estate to a farming estate in Leeseringen. 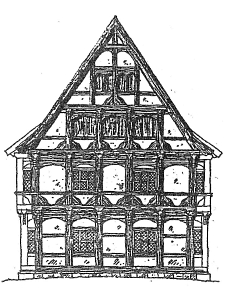 The Freses occupied the Fresenhof estate until 1528. The residence and the surrounding grounds have been given the name Fresenhof in honor of that family despite the frequent changes of ownership after the Freses' decline. From 1528 - 1598 it belonged to the von Bothmer Family. The date 1585 above the main entrance refers to architectural modifications which must have been carried out during that time. Also above the entrance are situated 2 sandstone slabs with the coats-of-arms of the Klenke and Holle Families.

Over the years the house has been frequently altered so that it better suited the needs of the inhabitants. In 1610 the building was completely rebuilt and acquired essentially the appearance we know today. Later, about 1670, it was lengthened in order to provide more living space. The house has 2 full stories; its main entrance is not situated on the gable-end, as was otherwise customary, but rather on the long side facing toward the courtyard.

The use of very massive oak beams (the uprights are 40-45cm in width) has given the house an imposing character. Particularly the long side facing the garden with its bay Windows and gables displays intricate half-timber work more impressive than anywhere else in Nienburg. The two out-buildings, a stable and a barn, were built in 1670. They were positioned so as to create a large square courtyard.

After the von Bothmer Family, a Mr. Poppelbaum took over ownership of the old Burgmannssitz. The records show successive owners as follows: von Hitzfeld (1682), von Pape (1761), von Cramm, Grütter and David Lühring (1866). The once so extensive properties belonging to the Fresenhof estate dwindled from decade to decade; land was divided up and sold pursuant to inheritance squabbles. In the year 1853, when the von Cramm Family was in possession of the Fresenhof, it housed the Nienburg Architectural Academy for a short time.

What remained of the estate was taken over from David Lühring by Bartholomäus Cabolet, who had previously lived in Glissen. His son ran a vinegar factory in one of the adjacent buildings and "Champagne Grütter", as Cabolet was known, stored his wines in the ancient cellar. Many old-time Nienburg residents still know the former medieval vassal's residence as "Cabolet's Hof"; the historical name "Fresenhof" has only been reactivated within the past few decades.

At the end of the 1930's the City of Nienburg assumed ownership of the Fresenhof complex. During World War II the museum's stock was stored here, though certainly not in a very appropriate manner. At that time, theft accounted for the loss of numerous valuable objects. The Fresenhof served as temporary quarters for the Employment Office until the new building was completed in 1968. After the Employment Office moved out, the Fresenhof was turned into a youth center for several years before the center was resettled in its present location in the "Eckhaus" (corner house) on Mindener Landstraße.

The then derelict Fresenhof presented a difficult problem for the Nienburg-City Council. Lengthy deliberations, seeking a sensible and appropriate use for the venerable building. Chronically inadequate storage space for the museum's possessions and the cramped quarters in the Quaet Faslem House (Leinstraße) eventually led to the decision to transform the old vassal's dwelling into a new museum. The City and County of Nienburg and the State of Lower Saxony joined forces to provide the financial means for executing the project and in December 1985 the building was handed over to the Museum Society, completely renovated and ready to be used. A better solution could probably not have been found! The Fresenhof, itself a  historic symbol and architectural gem, now provides a multitude of possibilities to present old objects and documents in an appropriate manner and with the necessary expertise, so that visitors may gain an insight into times long past (and a better understanding of the present)