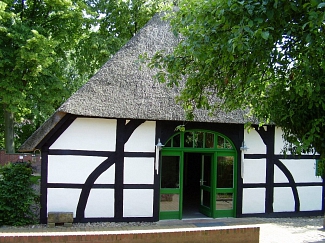 The Asparagus Museum in Nienburg was opened by Lower Saxony's Minister for Agriculture, Hans-Heinrich Ehlen, in May 2005 - just in time for that year's asparagus season.

The museum is situated in a timber-framed „Rauchhaus" (smoke house), an early type of local building constructed without a chimney, where the smoke from the central fireplace escaped through the thatched roof.

This particular Rauchhaus, originally built in the 1630s, was relocated from its original position in Dolldorf, on the other side of the River Weser, around 40 years ago and has since then stood near the Quaet-Faslem-House, part of the Nienburg Museum. In the meantime the Biedermeier Garden Quaet-Faslem laid out adjacent to his residence in the early 1820's has been reconstructed and now delightfully incorporates the Rauchhaus.

The Nienburg museums are situated close to the historic centre of the town, the main shopping areas and a recently developed public cycle path which links local sites beside the river Weser.

Growing asparagus has been a major part of life in the area, which for centuries has produced the delicious Nienburg Asparagus. These and other customs which have grown up associated with the plant and its production are aptly celebrated in the new Asparagus Museum, which is now open all year round.

What happens before this 'luxury vegetable' arrives on our plates?

The exhibition in the Asparagus Museum demonstrates the various Steps needed to plant, cultivate, harvest, market and eventually consume asparagus with the help of tools, models, texts, archaeological objects and short films.

Outside the main building larger pieces of equipment used by asparagus farmers await the visitor and the machinery in the open shed shows how the asparagus was processed on an industrial scale.

Visitors can also inspect an 'asparagus hut' and discover its various uses with more interesting - occasionally even 'juicy' - details emerging during one of the museum's guided tours.

Asparagus grows in a top layer of humus, supported by lower layers of sandy soil. Only given these specific conditions will seedlings grow into solid rhizomes, which in turn produce the asparagus shoots. Asparagus plants need to be three years old before they are ready to harvest and after about eight years of intense tillage, the soil needs to rest for several more before the cycle can begin again.

Asparagus plants are extremely sensitive to attacks by the asparagus-beetle and -flies.

To create a new asparagus plantation, the soil has to be carefully prepared. The multiple roots need to be able to reach the valuable nutrients in the natural water supplies below ground, so special deep ploughshares have to be used to mix the lower sandy soil with the humus layer at the top. Shortly before harvesting, the asparagus-beds or -mounts are raised above the plants.

These allow them to grow without light below the soil, producing 'bleached' or white asparagus shoots, as opposed to the 'green' varieties favoured in other countries. 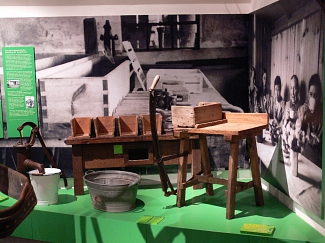 'Bleached' asparagus is much more populär in Germany than green asparagus and has to be grown in raised beds, which is a labour-intensive process. The crop is read from the middle of March until 'Johanni' (24. June) and even today, is harvested solely by hand and with the help of traditional tools, like special asparagus knives and baskets. A trowel for smoothing over the ground after the shoots have been removed is also needed, so that new shoots breaking through the soil can be spotted before they are exposed to the light.

After harvesting, the asparagus was in former days carried to a shed on the plantation itself and then cut into lengths (22cm is considered the ideal measurement), washed and graded. All these tasks were, and often still are, accomplished by hand and with a pair of good eyes.

Today most farmers take the shoots home in their cars though and prepare the asparagus for sale there. Some technical innovations, like conveyor belts and peeling machines, are also used to alleviate the back-breaking traditional ways of harvesting the vegetable.

Another important aspect of asparagus cultivation is the plant's preservation in tins. Factories for tinned asparagus once existed in Drakenburg near Nienburg, and in Burgdorf and Braunschweig.

However, most German asparagus is today, as always, sold fresh.

The most popular and profitable way to sell asparagus today is also the simplest. The shoots are sold directly from the fields at Stands along the main roads, either from the farms or at weekly markets. Another part of the harvest is sold to wholesale traders who supply supermarkets and large chain Stores.

The Importance of Advertising

Each year traditional festivals, markets and other events alert buyers to the arrival of the first asparagus harvest. A particular attraction in Nienburg is the annual Asparagus Queen Pageant. The young girl elected to carry the crown has, in the past years, become an ambassador for the whole region.

An interesting by-product of the asparagus harvest have been a number of archaeological objects which have come to light while deep-ploughing the fields. These include prehistoric axes and flint stones, urns and metals.

No harvest without seasonal workers

'Once upon a time' only local farmers and their families and labourers managed the annual harvest without outside help. However, with growing demand and the migration of local farm workers to industrial centres and other occupations, increasingly seasonal workers had to be employed. Initially most of these came from Mediterranean countries but since the 1990s it is Polish helpers who make up the bulk of the seasonal workers. The museum has a display of presents and cards which they have given to the farmers and their families with whom they are staying during the harvest.

And the culmination: Asparagus Feasts

The upper floor of the 'Rauchhaus' houses a unique collection of objects related to the consumption of asparagus and the 'culture' which has grown up around this 'luxury vegetable'. These are lent by the Niedersächsische Sparkassenstiftung, Hannover. They include a fascinating variety of cutlery and crockery specifically designed to display and eat asparagus and span several centuries.

And yet another aspect of the history of asparagus is highlighted in this section: the use of the plant in medical practises.